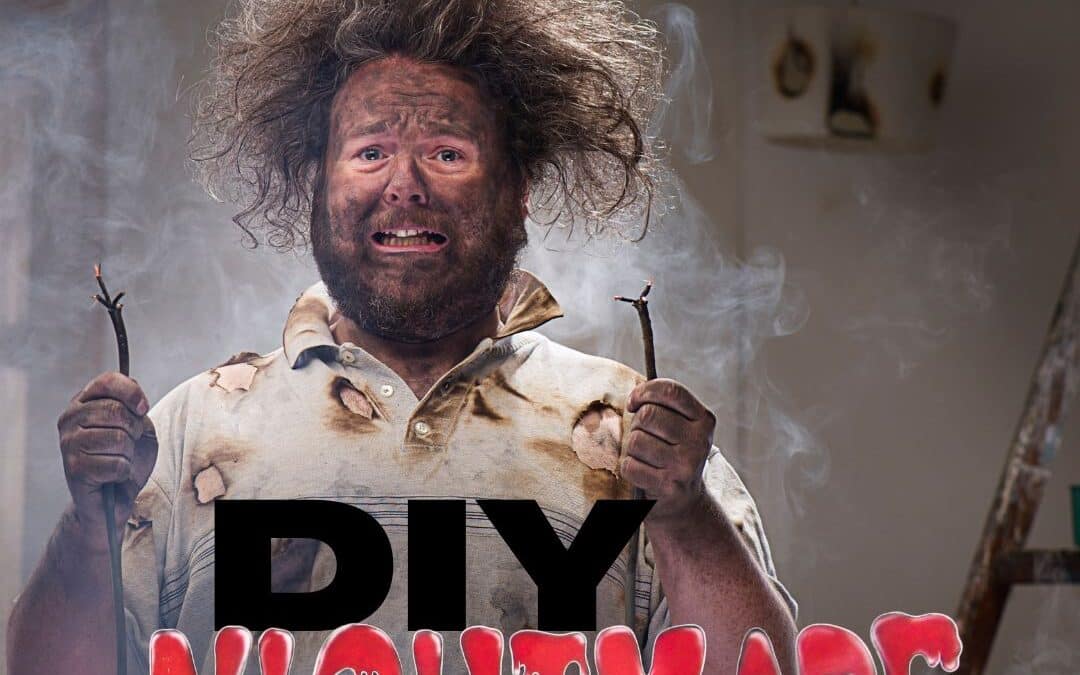 It’s almost Halloween which means spooky stories and haunted house movies. We’re all looking forward to the night of costume-filled streets and trick-or-treating. And, of course, no one wants anything to go wrong during the holiday seasons ahead; those issues often include DIY nightmares.

TRUST Heating & Air is taking the top mishaps from news outlets and conversations from around the web to give you the complete DIY Nightmares for Halloween– and how you can avoid them happening to your home.

Contact us on how to avoid DIY Nightmares this Halloween and beyond. Let’s get spooky! 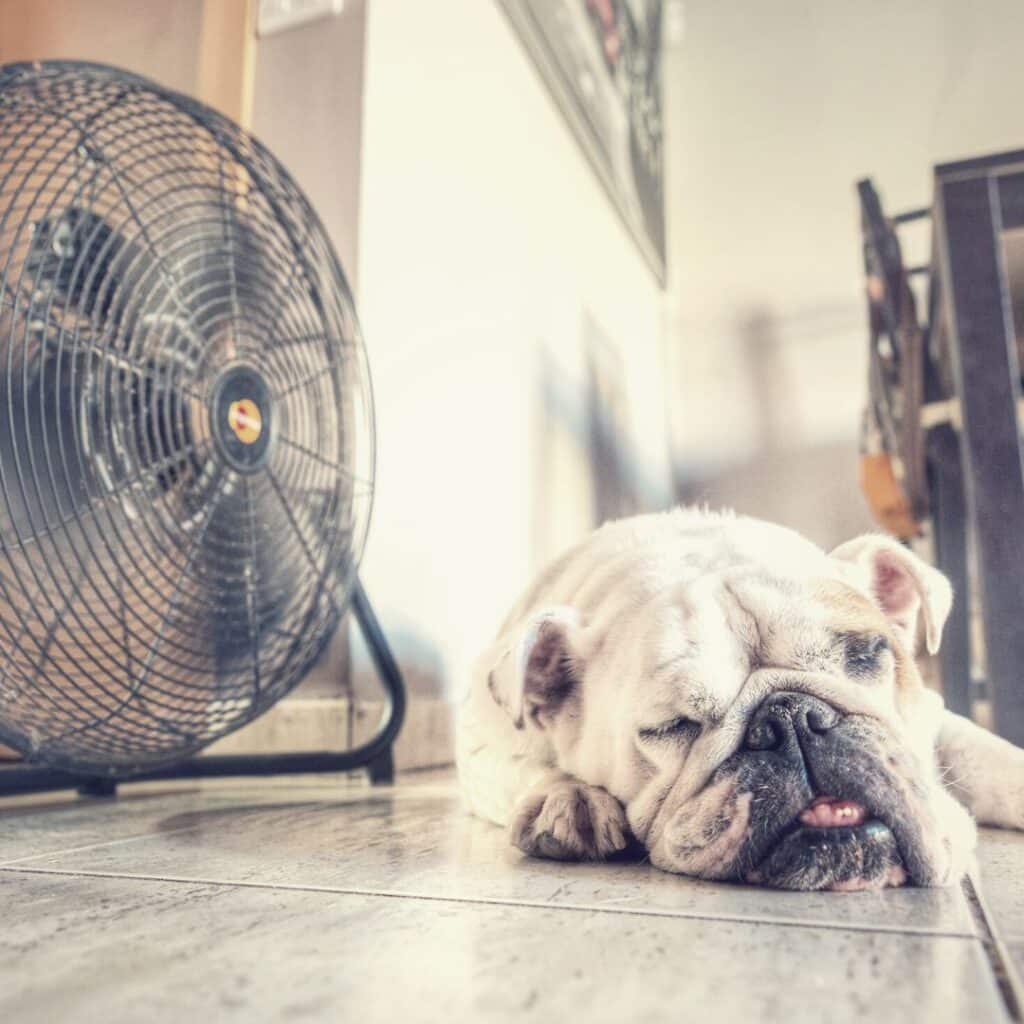 1. DIY Nightmares and a Smoky Thermostat

A homeowner once called us to replace his thermostat. He’d already removed the broken one, but he wasn’t comfortable installing the new technology on his own. Our tech got there and noticed what the man had taken off looked brand-new—so the tech asked what the trouble was.

Well, he found out the unit was new–or it had been when the homeowner attempted a DIY installation! That said, thermostats are not intuitive, and the homeowner had hooked the system up wrong entirely. Therefore, there was nothing wrong with the thermostat in the first place!

Unfortunately, we get a lot of calls for situations like that on HVAC DIY jobs. When a homeowner tries installation or repair on his own, there are times when nothing happens. Then the homeowner will try it again until it works– but sometimes, that DIY starts smoking! Yep, his thermostat had done just that. The good news is he immediately turned off his breaker and called TRUST.

A word of advice:

While a smoking thermostat may sound like a bad break, it was the best possible result. He knew immediately that something wasn’t right and was able to turn off the breaker and call in a pro without hesitation.

The truth is that homeowner got luck. Clearly, he had a damaged thermostat, but he hadn’t damaged anything else. Wiring the thermostat wrong can cause electrical issues in your home and hurt your furnace when you turn it all back on–and that’s a fix that’s much more expensive than the thermostat!

Avoid DIY: Thermostat replacement tends to be fast and cheap when you have a pro handle it. It is just not worth risking your HVAC system (or the resulting scorch marks on the wall). After we gave the client the bill, his eyebrows went up, and he exclaimed that if he knew it would be that affordable, he never would have attempted the swap.

2. The Case of the Disappearing Warranty

Not all DIY repair stories end well for the homeowner’s checkbook. Our next HVAC DIY nightmare involves a homeowner who’d attempted major AC work alone. Noting that his system was outdated, he decided to add freon to “kick it up a notch,” he said. Okay, freon recharges are a standard part of air conditioner service. Still, additional factors are involved when deciding if freon is the solution to the air conditioning issue.

When that homeowner finally called us, it was too late– he was way over his head in air conditioner repair and had damaged the system. Perhaps worst of all, he’d violated both the manufacturers’ and the installer’s warranties in the process– which had previously been intact– all in the name of saving money.

Avoid losing out: Sound like a worst-case scenario? We consider this another case of incredible luck! Here is the take on this unfortunate DIY nightmare.

Refrigerant is toxic: We’re still not sure how he got a hold of a non-automotive freon in the first place! In most states, only licensed professionals can legally purchase things like that. And the electricity he was messing with in the AC is nothing to joke about either. Indeed, the man could have injured himself quite seriously.

So, the moral of the story is, don’t attempt a major AC repair! Take it from us; it’s not worth the risks associated with electrical shock, toxic exposure, warranty violation, or navigating AC freon.

Call us —before the real damage is done! 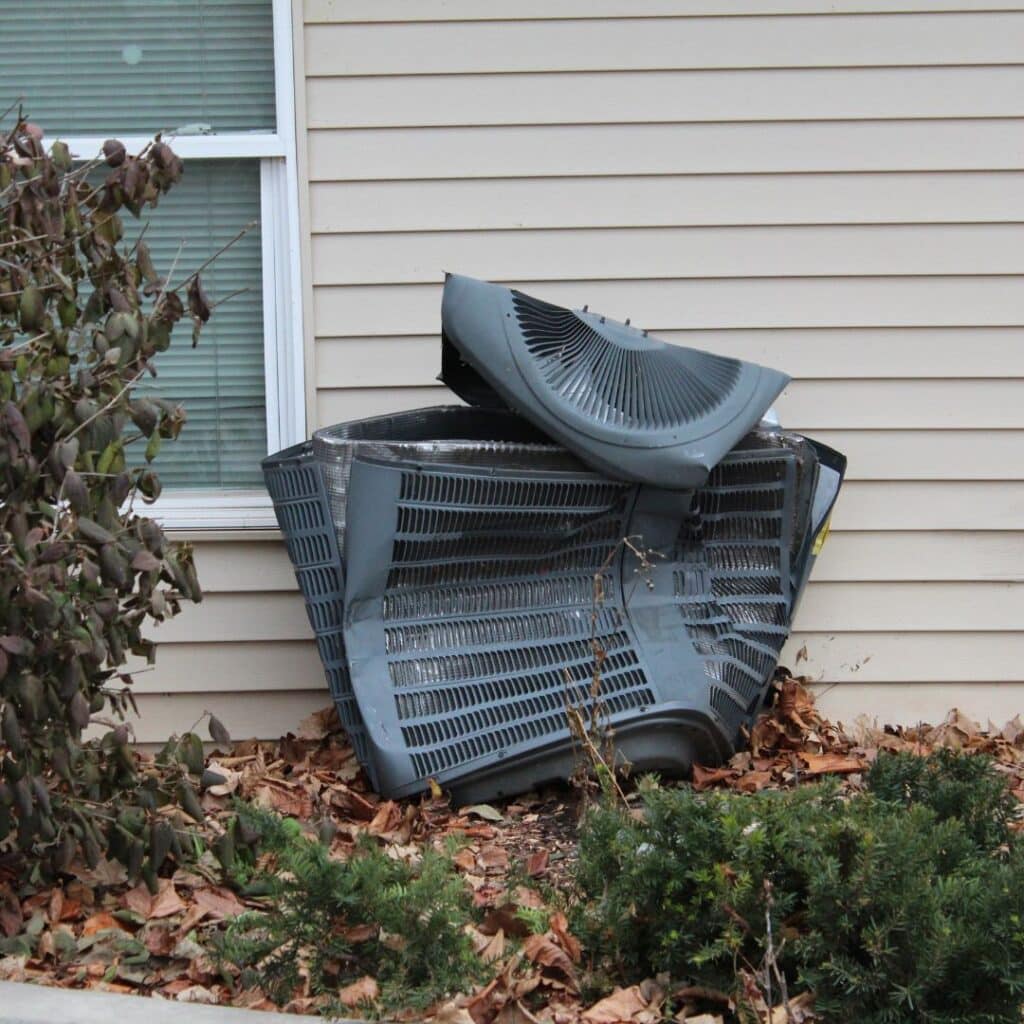 3. Trip to the Hospital

A homeowner in the United Kingdom decided to install an AC unit independently. His only help at the time was his daughter, who was responsibly standing down on the ground holding the ladder’s base. Nevertheless, the man slipped, causing him to lose grip of the unit. The entire unit came crashing down on top of him; it just missed his daughter, though. The father convinced his daughter that he was okay and continued installing the AC unit. Oh, but he did need a ride to the hospital for several stitches.

Avoid a fall: It’s always best to call a professional to install a new unit or to have any significant work done. Doing this will save you a lot of time, so you’re not stuck doing something you’re not entirely confident about. TRUST Heating & Air are experts when it comes to heating and air.

One day, our team arrived at a house to inspect the ductwork. There we found a man had covered every inch of his ductwork in silver duct tape. While it may have looked like he got the job done, duct tape is really not the best solution for sealing up your ductwork. You never know if you have left little leaks that will leak air and waste money.

Avoid waste: Having ducts adequately sealed is a wonderful way to keep your energy cost down and keep your indoor air clean with proper circulation. Remember, it’s essential to have the job done right by a professional.

According to a technician, one customer said this man told him he was sitting in his recliner one night watching football when his oldest son, who doesn’t say much, asked him quite pointedly what happens if the gas pressure is tested, and the tester forgets to put the plug in after. Glad his son spoke up; the home was evacuated, and professionals were called just in time.

Avoid Disaster:  When our technicians work on gas appliances, they always check connections for leaks and gas traveling through the valve during the off cycle. In fact, our team uses a leak detector for escaping combustible gas.

A sweet lady bought an old house with a coal furnace- yes, a coal furnace. Now, with that furnace, it was toasty in the Winter, and the bills were never over $400. Then a friend convinced her that radiant heat was more efficient and healthier for her. So while she was out of town, all the ceilings were torn down to install Pex Piping, and the ductwork was torn out. Not the 100-year-old furnace– just the ductwork and the giant fan on top of the furnace.

Two freezing winters later, her roommate moved out while she was trying to figure out what to do with the place now. She got a new quote for a furnace replacement and ducts. It would cost her $6,500 if she removed the old furnace. Luckily a friend gave her a new European boiler that only needed to be converted to 110 watts.

Should she try zone heating first? Of course, she was worried. Her concerns were if the old floors would be able to stand the extra weight of pipes full of water. In response, she bought a ceiling fan with a ceramic heater, but she was unsure if it would work for all the space.

Avoid the cold: If you are questioning what kind of system you will need in your house, it’s best to reach out to a professional for guidance. We will know exactly what will work best for you.

Your home’s HVAC system is undoubtedly complicated to understand. Interconnected cooling, heating, and ventilating components rely on each element to properly treat your home’s air. So, when something goes wrong with one part of the system, it affects the whole function of the heating and cooling.

TRUST understands why you’d want to try to fix any problems you notice, but here are some more issues we see all too often!

Suppose you are unfamiliar with air conditioning repair. Then, what you don’t know can hurt you– an AC unit has many delicate moving parts. In that case, it is easy to accidentally damage, bump, or dislocate any one or more of those parts. What’s worse, you can cause the problem to be much more damaging (and much more expensive) than the original problem you were trying to fix.

Avoid Incorrect DIY: Clearly, the last thing you want to do is turn a minor air conditioning issue into a big problem. DIY repair on the air conditioning system often ends up doing precisely that. They worsen the AC problem, making it take longer to repair. The longer it takes to repair, the longer you go without air conditioning.

Listen, it’s not worth the risk. Not to your AC system, not to your pocket, and most importantly, not to your health. No sense in trying to repair your AC without professional assistance.

DIY Nightmares can be embarrassing, but we do not judge. Our team is happy when you call, no matter the reason. After all, that is what we train for. TRUST has the proper knowledge and experience to assist you and your home with all your air conditioning and heating needs. We would hate to hear that your home has become a nightmare, close to the holidays or any other time!

Contact TRUST Heating and Air for all your home’s HVAC repairs and maintenance needs. 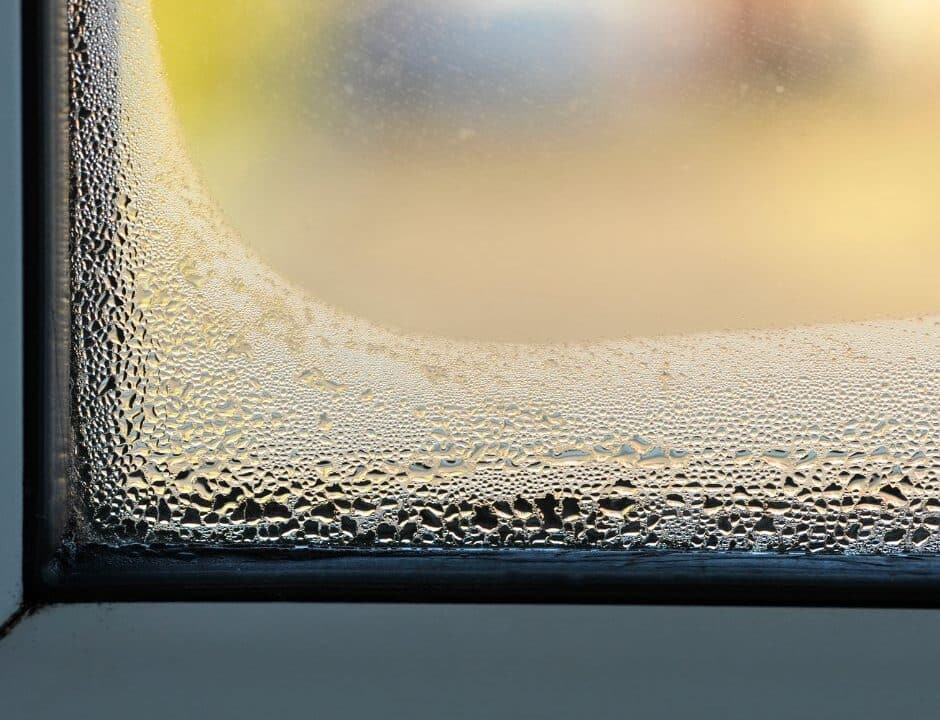 How to Stop Condensation on AC Ducts

Safe Use of Space Heaters 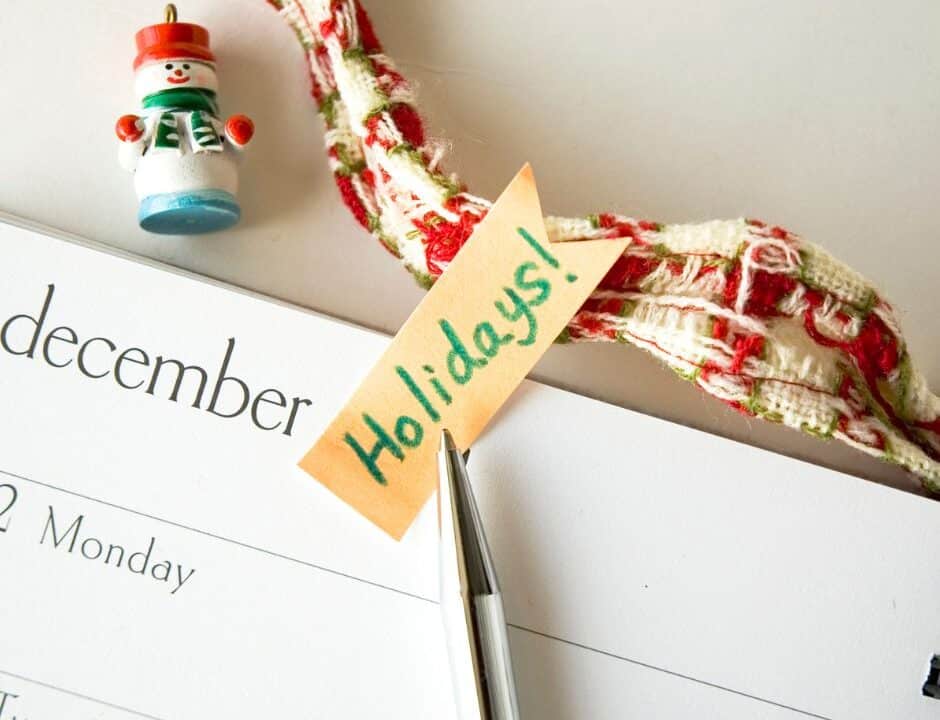